skip to main | skip to sidebar

As I walk the two and a half miles from home to school. I look, listen, and record the birds seen. It has been a healthy choice for me. I am in better shape and have marked the arrival of each new spring bird. It has been a blustery spring and the walking cold, but filled with the song of birds. As I walk past fields and farm houses. I hear the changing songs match the habitat. 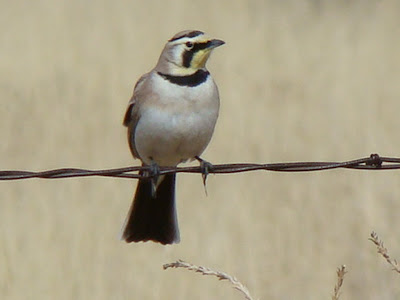 The songs change as the sun comes up. The Horned Larks tinkling away in the darkness accompanied by the occasional rattle of Western Meadowlarks. As I proceed the Meadowlarks start into full song just before the sun rises. In the distant grove surrounding an abandoned farm house is heard the Say's Phoebe's nasal call and the mellow song of Mourning Doves. As I approach town the song of the Eurasian Collared Doves drift in. The busy chatter of the House Finches is welcomed along with the erratic and noisy calls of Common Grackles, House Sparrows, and the occasional Killdeer. 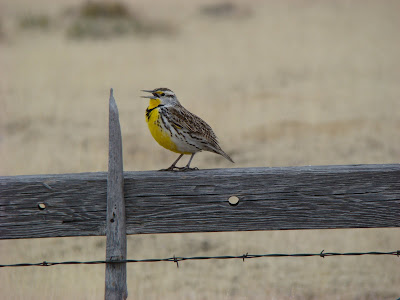 As I retrace my steps home in the afternoon. I see many of the same birds. Yet a surprise is always around the corner. One afternoon I heard a strange new song and looked into the field and saw a Mountain Plover take off and land a short way off. It was the first of the season and the first time I have ever heard the song. Another Mountain Plover was seen and heard in the field near my house when replacing shingles that had blown off in the last huge wind storm.

A peaceful, calming time to reflect, unwind and enjoy the birds along my selected path. It's worth waking up before the suns first light to capture the perfect chorus and spectacular light stretching its wings.

Taichidonut
I have returned to ranch country in the West Desert of Utah. I love being with wonderful ranchers and teaching kids who know the value of work.